Trains before VIA Rail

Imagine life prior to the 1800's, before railways appeared and completely altered the way people travelled. People used to move across land on foot, by calèche, by stagecoach, and even on horseback. Not even bicycles had been invented, and the world had to wait until the next century before the advent of airplanes and automobiles!

In 1867, Canada became a country. At the time, it included

four provinces: Quebec, Ontario, New Brunswick and Nova Scotia. These last two Maritime provinces joined Confederation under the condition that they would be linked to the rest of the country. How? By railway of course! In the years that followed, British Columbia, along with other provinces, agreed to become part of the new country, all under the same condition. In other words, rails became the very first link uniting all of Canada's regions.

While freight transportation increased throughout the 1950's, fewer and fewer passengers travelled by train. Know why? It was all due to the rise in popularity of automobiles and airplanes. In fact, the 1960's saw such a significant drop in rail travel that the major rail companies considered abandoning their passenger service altogether. And so, to ensure the preservation of this means of transportation, the Canadian government saw fit to undertake measures of its own. In 1977, VIA Rail Canada was created and started operating a year later. The government had the conviction that passenger trains were simply too important to abandon. This meant creating a service that was efficient, fast, and comfortable.

Today, few among us can imagine a world without trains as a means of transport. Day after day, VIA Rail carries thousands of passengers from one end of the country to the other. Yes, times have indeed changed. And for the better. People have once again discovered "a more human way to travel". 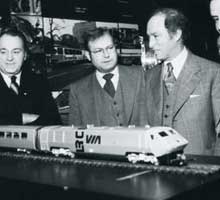 In January 1978, VIA and the Ministry of Transport announced the purchase of ten LRC train sets in the presence of Prime Minister Pierre Elliott Trudeau Have you ever seen a miniature electric train?

Miniature electric trains are packaged in large boxes containing tracks you spread out and assemble on the floor to create a railway. Inside the box, you'll also find a locomotive, passenger and freight cars, a station and several small figurines. Now sit back, and watch it go! The electric train set became one of the most popular birthday and Holiday gift ideas for children throughout the 1950's and 60's. For hours at a time, kids could escape to distant horizons and faraway lands, all by train! Enthusiastic collectors of all ages can still be found today, devoting their free time to running miniature trains through reconstructed villages and detailed landscapes.

What a question! No single person can take credit for having invented the train. The "first" trains appeared at the dawn of the 19th century and were the product of over 200 years of evolution and progress. In fact, wooden tracks used in mine shafts date all the way back to the latter portion of the Middle Ages.

What are railroad tracks?

Railroad tracks and railways are the same thing: two parallel tracks forming a single path that guides the train along a given course. The distance between these tracks has changed over time, and the very first trains were pulled by horses, not locomotives. 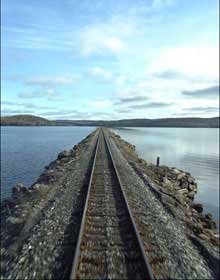 What is the distance between railway tracks?

A precise 1435mm track gauge, as we call it, has been in use since 1830; although it was not adopted as an international standard in England until 1845. It is engineer George Stephenson who chose this gauge for the first main-line railway, the Liverpool and Manchester Railway. In fact, the standard is referred to as the "Stephenson gauge". While this gauge still varies in some countries, it continues to be used all over North America and throughout most of Europe. But why this gauge and not another? A fascinating legend attributes this gauge to the ancient city of Rome. As the heart of a gigantic empire, Rome was linked to its Mediterranean neighbours by a network of roads used by merchants and the army. Grooves were dug along these roads to guide wheels at a distance of, you guessed it, 1435mm. Some remains of these roads can still be found today. Chariots had to be built accordingly and, over time, the measurement became standard. So, it could be that horse-drawn Roman chariots thousands of years ago came to define the precise track gauge we find on today's railways.

Where there were trains, there was coal

Long before the arrival of diesel engines, locomotives were powered by steam boilers, in which water was heated by coal or wood. As a result, railways spread rapidly in countries that had access to coal and wood, such as Canada, a nation rich in natural resources.

A train, a river, and no bridge!

Between 1880 and 1883, the frozen St. Lawrence River was home to a railway stretching across the ice from Montréal to Longueuil. An eccentric contractor named Louis Adélard Sénécal spearheaded this dangerous project. Naturally, each track had to be removed quickly before the spring thaw. But in January of 1881, one locomotive derailed and plunged directly into the river. Two years later, Sénécal's company… "went under".

Why are stations built in one location and not another?

Many cities and towns were built around railway stations, not the other way around. Railway companies would establish these stations to supply water to their steam locomotives. With time came an increase in human activity around these sites: hotels, stores, villages and, eventually, agricultural activities. How far apart were these stations built? This depended on the number of kilometres a train could travel over an eight-hour period.

Canadian Pacific's discovery of natural gas in the Prairies came entirely by accident in 1883. While digging a well to supply water to one of its steam locomotives, a team of workers discovered natural gas where Alderson, Alberta now stands. Over the following years, several natural gas wells were dug in and around Medicine Hat, giving rise to the province's thriving natural gas industry.

The building of Canada's transcontinental railway ended in 1886 with Canadian Pacific's first Montréal-Vancouver crossing. By the time it was built, the railway had taken 12,000 workers, 5,000 horses and 300 dogsled teams to complete.

Web sites and pages of interest

Below is a list of selected web sites for children. More can be found in our Useful Links section.

VIA Rail knows how to indulge kids. In this section you'll discover the Okidoo games. Students and parents can also find helpful links to information pages.

Located in Saint-Constant, near Montréal, the Canadian Railway Museum offers its public a unique opportunity to see and experience life in the railway world. In fact, visitors can see not only trains, streetcars and all their related infrastructures, but also use these various modes of transportation right on the Museum grounds. The garden train operates daily on the site while the observation streetcar, nicknamed the Golden Chariot, runs when the weather permits. And every Sunday, a passenger train takes visitors for a short trip up to Montée des Bouleaux.

The Safe Trax ChallengeThis link opens in a new tab

Do you know how to avoid trouble on the tracks? Challenge your knowledge of the facts. Take the Safe Trax Challenge... where any time is train time!

The Canada Science and Technology Museum, located in Ottawa, has developed a web site that is sure to please anyone who enjoys archival photographs. Here you'll find a substantial portion of CN's photo collection, fully captioned, dating all the way back to 1950.